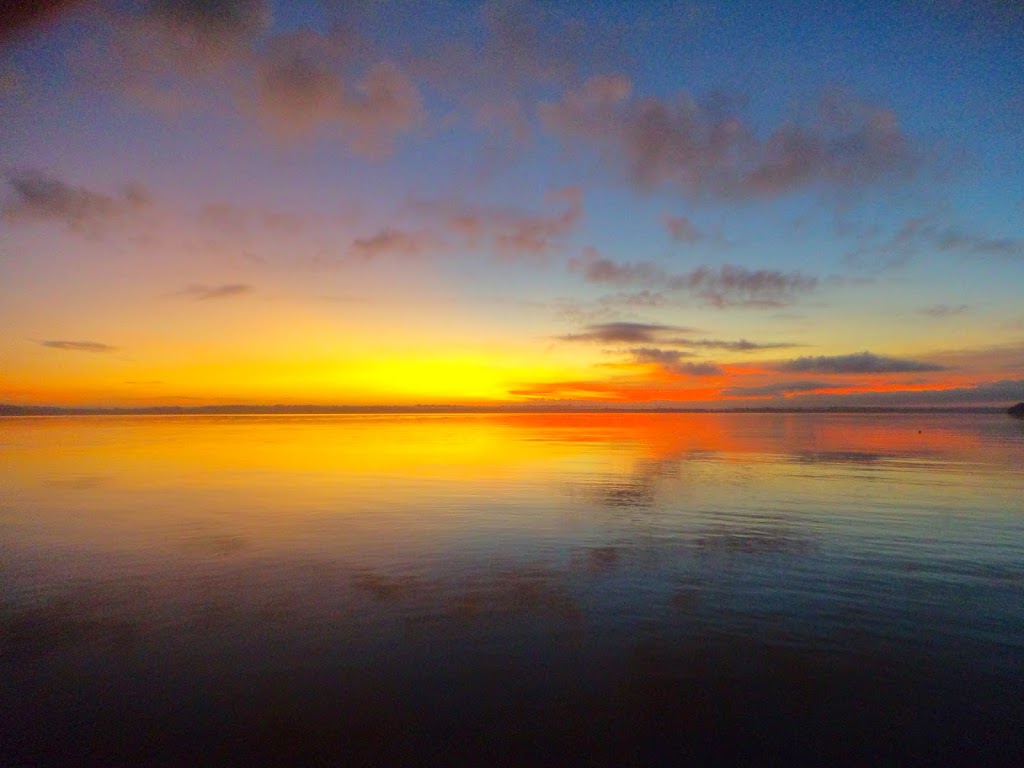 It is a warm moonlit night here.  There is a gentle breeze – presumably attenuated trade winds – whispering against my neck.  The full moon is shining on the water, a silver path to the future.  Clouds are in the sky, and there are far more behind than ahead, symbolically as well as literally.  I feel, for the first time in months, that my creativity is slowly starting to come back and that life is becoming balanced again.

The last quarter of 2014 was spent exploring three rarely visited countries in northern South America:  French Guiana, Suriname and Guyana.  Each country is distinct, having its own culture, history, and selection of languages, but there are similarities too.  Most of whatever development there is lies along a coastal strip, and the interior of each country is relatively untouched – truly a paradise of unexploited rainforest.  The primary means of access inland is using the rivers – roads of a reasonable standard exist pretty much only in coastal areas.   Being on a sailboat allows the rivers and the smaller settlements to be explored in a way that would be very difficult using scheduled transportation.

There is real pleasure in exploring these almost unvisited places – in some cases Otra Vida was the only boat that had visited in several years, in other cases one of a few boats each year.  People ashore are not jaded about cruising sailboats, and there is genuine interest and friendliness.

The sun and humidity mean the focus during the day is escaping the intense heat, but the payback is lovely lazy evenings in the hammock, reading, contemplating, being.  Most of all just being.

This concept of value existing in “being” is something that has been appreciated in philosophy right the way back to Socrates, but it is something that economics seems unable to comprehend.  Sure, there is a history of looking at different types of value.  Marx´s economics was built on the foundational work of David Ricardo and his concept of use-value and exchange-value – itself built on Adam Smith´s idea of value.   (A friend once dismissed Marx as a “minor post-Ricardian economist” who got almost everything wrong.  Hmmm.  While his political solutions are discredited, it does seem to me there is something in his view of economics and his analysis of history).

﻿﻿For all their brilliance I do wonder if Marx and Ricardo, being city dwellers, missed something in their deliberations about value.  Surely there is more to value than just use or exchange – there is value that cannot be exchanged and which has no use.  It is the value that something has simply by existing – the value something has when witnessed, and for that matter when not witnessed.

A few of the more contemporary Marx-inspired thinkers seem to have picked up on being-value.  Guy Debord and Raoul Vaneigem of Situationist fame had their derivés.  When you strip away the Situationist jargon,  a derivéis a kind of convivial extended pub crawl with interesting thinkers and artists in a francophone city.  Derivés were all about being-value  – enjoying the pleasures of the location, the people, the architecture, the conversation, each city´s unique energy.  (I suppose there was also some use-value and exchange-value in derivés too in their enthusiastic sampling of each and every local alcoholic beverage).
﻿﻿﻿﻿

There must have been some special evenings in Paris and Brussels in the late 60s if you happened to stumble upon a derivé and were not too intimidated by Debord to join in.  Malcolm McLaren managed to tag along with the Situationists and it set him on his path.  Roger Scruton found himself in Paris in 1968 too but as far as I know did not engage with the Situationists (he anyway would have tut-tutted, disapproving of almost everything that came after the Victorian era except himself).  McLaren went on to energise a generation of youth with a punk worldview, oversaw the birth of the Sex Pistols (packed with  Situationist references), and along with his then partner Vivienne Westwood popularised punk art and fashion.  That feast of ideas and outlooks still resonates and inspires today.  Scruton for his part went on to inflict screed after tedious screed on us, writing at times about wine, sex and music, and managing to make even these delightful subjects dull and boring.

Dull and boring the three Guyanas are not.  There is little of “use” and little to “exchange” from the land here.  There is, however, magic to be experienced in just being here and being alive.  Magic that comes from contemplation and slowing down enough to appreciate the passage of time and witness the daily rhythm of nature.  Anchored off one of the many uninhabited (and uninhabitable) islands in the rivers, lying in a hammock, listening to thousands of birds, monkeys, frogs and other unidentified animals in the evening and at dawn is special indeed.  This is being-value writ large and it is intensely real, even if it cannot be quantified in our economics obsessed zeitgeist.