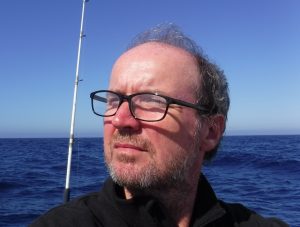 Originally from the UK, Martin left the island in the 1990s.  He has lived in half a dozen countries and worked in many more, finally escaping the corporate world in 2009.

He started sailing in his early 20s and has shared or owned several boats, acquiring Otra Vida in 2005.  He lives aboard about half of the year, spending the rest of the time on land with friends, in community, or in the mountains. 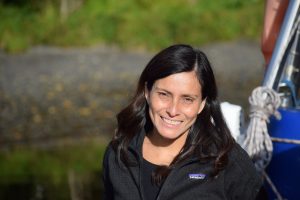 Patty was born and raised in Peru.  She is a social psychologist and has spent her working life in international development, human rights and public health with a focus on gender. She believes a more equitable and inclusive world is possible through community life and peaceful protest.

She enjoys poetry, literature, political and cultural theory, travel, swimming, hiking, and sustainable tourism.  She also plays guitar and sings.  She loves learning about new cultures, standing watch on overnight passages, and preparing bread on board.

Before meeting Martin she hadn´t sailed in a sailboat, and recently took sailing classes in order to prepare for a new life in the near future. Patty has sailed with Otra Vida in Patagonia and extensively in Polynesia. 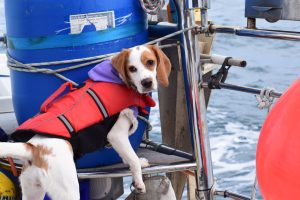 Emma is Patty and Martin´s dog, born in 2017.  We think she´s a cross between a beagle and a pointer.

Named after the exemplary thinker and writer, Emma displays the same anarchist spirit as her namesake, and is super-friendly, energetic and full of curiosity.  She is a purist when it comes to sailing, enjoying the wind and the sea, disliking boat life only when the engine is running. 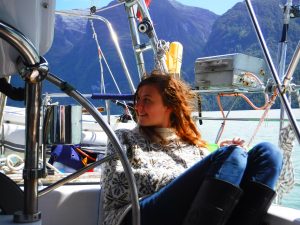 Allie grew up in British Columbia, finding freedom in sailing and expression in writing and travel.

She sailed with Otra Vida through the Patagonian channels from Puerto Montt to Puerto Williams, filling evenings with engaging conversation, unforgettable poetry readings, and hand-knitted hats.

Some of her beautiful writing can be found here.  Given her evident talent, I expect we´ll be hearing more of Allie in the future.

After travelling by land for a few years in the Americas, Gusty joined Otra Vida in Guatemala and sailed to Panama via Roatan, Guanaja, Providencia and the San Blas Islands.

His plan was to get a sailboat and live on board, and less than two years later he left Iceland in his own sailboat which is now in the Mediterranean.

He´s an expert on electronic music, a capable sailor, and – so far – the only person to jump from the top of Otra Vida´s mast. 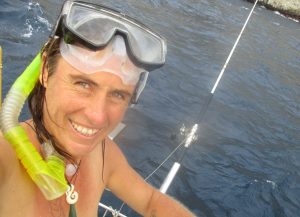 Mixing spirituality, volunteering, mountains, and sailing, Kata travelled for 9 years in the Americas with just her backpack.  She sailed on Otra Vida from Panama to Ecuador, and subsequently returned home to New Zealand via the South Pacific islands by sailboat.  She also sailed with Otra Vida in Tonga in 2019.

No one who spends time with her ever forgets her free spirit, loving energy, optimism, intelligence, and grace. 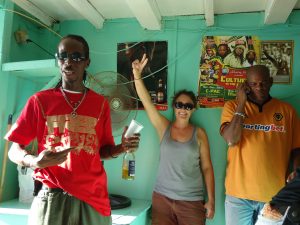 Born in India, growing up in Papua New Guinea, and living most of her life in Cairo, Prague, and various places in Asia, Wendy has a treasure trove of travel stories and a wide perspective on life.  One is never bored in her company.

She sailed on Otra Vida from northern Spain to the Mediterranean, the following year from Gibraltar to the Caribbean via Morocco and the Canaries on Otra Vida´s first transatlantic passage, and later through the islands of Western Scotland.

She makes quite possibly the best curry in the world, now a much appreciated dish on board Otra Vida. 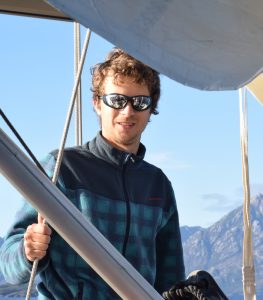 Born in mainland France, Jérémie and Lison lived in a Christian community on Réunion for many years, and decided in their 20s to pursue a nomadic life of volunteering, mountaineering and sailing, interspersed with periods of work to fund their adventures.  Their most recent project was three years in Madagascar promoting contraception and birth-control.

They sailed on Otra Vida north through the Patagonia channels starting in Puerto Natales.   A super team, they each brought different gifts – great quotations, stimulating discussions, lots of love and caring, wildlife surveying, whale watching … and, being French, naturally they cook wonderfully. 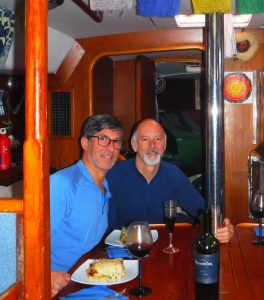 Keith and Wayne recently retired from corporate life, sold their home and other possessions, and fulfilled their plan to become nomadic wanderers.  They first sailed on Otra Vida from Puerto Williams to Puerto Natales, through some of the most spectacular scenery in southern Patagonia. Later they sailed from Chile to Tahiti, enjoying remote South Pacific anchorages and island life.

Experts in card games, breakfast smoothies, and wonderfully far ranging conversations, they are an unforgettable couple creating a space of love, acceptance and good feelings with whoever they meet. 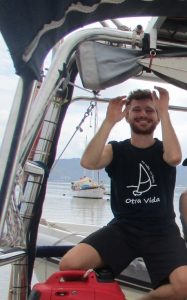 David sailed with Otra Vida from Panama through the Canal and on to Ecuador.  A man of lively conversation and tremendous artistic talent, he roamed through the Americas painting murals and volunteering, including helping with the aftermath of the 2016 earthquake in Ecuador.

David kindly painted “cloud fish” onto one of the locker doors on Otra Vida.

After a couple of years of painting and performing cabaret in Berlin his nomadic life brought him to the US to concentrate on painting murals while touring in a camper van. 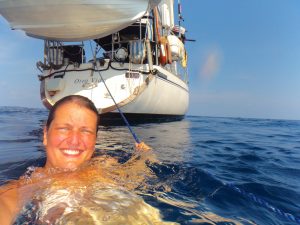 Therése joined Otra Vida in Guatemala after exploring traditional healing ceremonies in Peru´s Sacred Valley.  She sailed to Panama via Roatan, Guanaja and Providencia, along with some weeks of idyllic snorkelling and swimming in the San Blas islands..

After her time travelling in central and south America she returned to her native Germany with new perspectives and a sense of contentment. 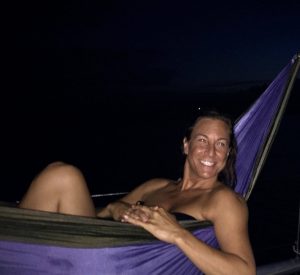 Kathy sailed on Otra Vida in Guatemala and Belize in 2015, and in the Beagle Channel, southern Patagonia in 2017.  The first trip was hot, calm, tropical.  The second windy, snowy, cold.

Kathy grew up in the US and has spent the last two decades living in London and Mexico.  She travels regularly to interesting places and volunteers helping remote communities with healthcare and assisting asylum seekers in a US detention centre. 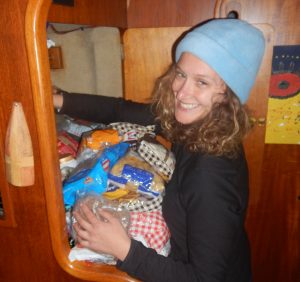 A native of Portugal, Susana travelled for almost a decade working onboard cruise liners.  She saw first hand the negative effects of consumer tourism, and was especially moved by its impact on her beloved Lisbon.  She stepped out of that world, travelled to Antarctica, and joined Otra Vida in Puerto Natales to sail north to Puerto Chacabuco.  She is keenly interested in waste reduction. 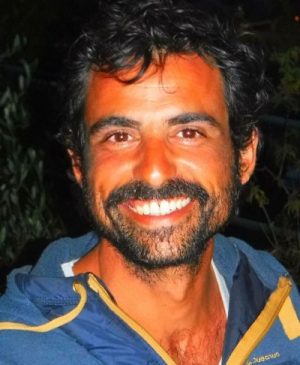 Pere is a Catalan sailor who I´ve chatted with for several years about his plans to sail in Patagonia.  He was touring Chile in early 2019 with his marionette theatre and was able to join us at the last moment to sail from Valdivia to Juan Fernandez.  A mix of a fine intellect schooled in philosophy and literature, communal living, sailing experience, and a master puppeteer, he was a joy to share time and conversations with.  He lives on his own steel boat in Barcelona, and independently developed a vision of a tribe of vagabond community sailors. 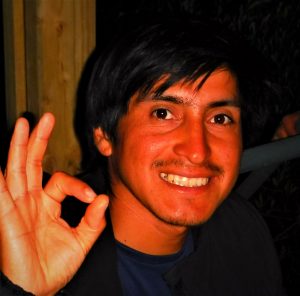 Piro is part of the long and honourable tradition of anarchist thinking and indigenous rights activism in Chile.  He helped with maintenance on Otra Vida in Valdivia and sailed with us to Juan Fernandez.  His beautiful guitar playing and reflective protest songs were a feature of evenings on board, and his cooking livened up mealtimes with vegan versions of regional dishes.  He even managed to make kelp palatable! 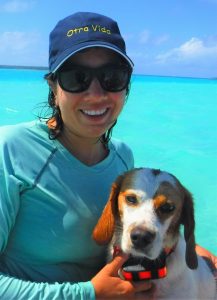 Sheena joined in Tahiti and sailed with Otra Vida to Tonga.  A well read feminist and activist, she lives in a communal house in Oakland and works on charter sailboats in San Francisco Bay.  She´s a great conversationalist, always interesting, open and intelligent, and we explored complex topics like privilege with depth and nuance.  Sheena also explored the possibility of living without snack food, abandoning that experiment when we reached American Samoa.