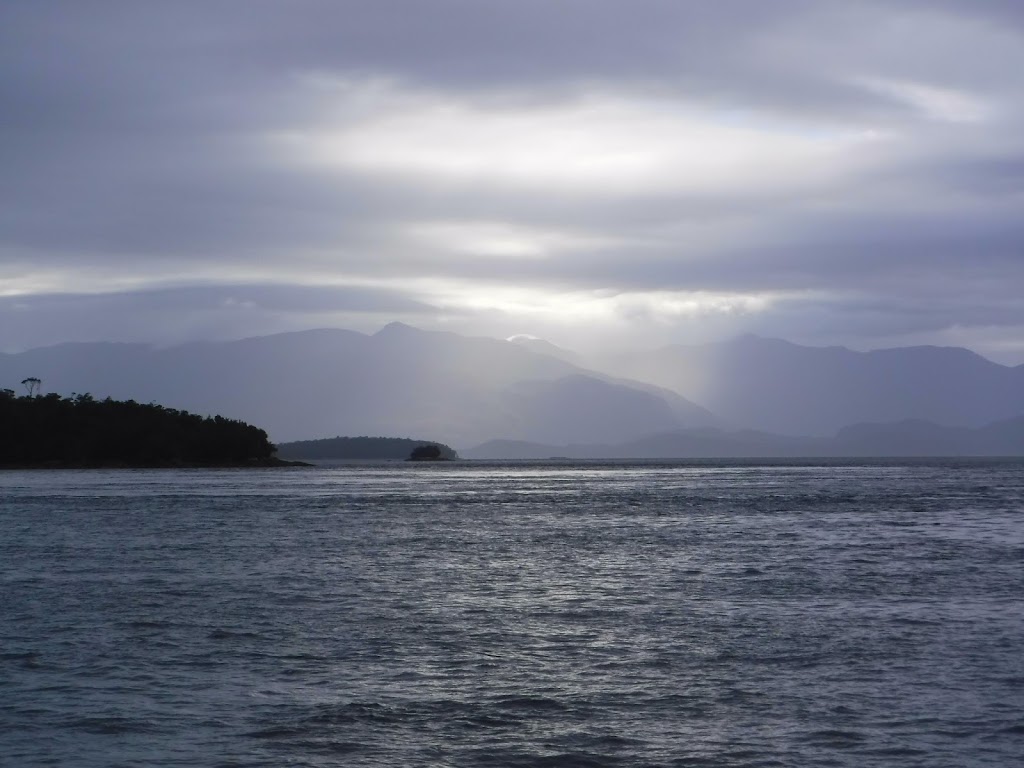 It was a dark and stormy night… it often is in Patagonia.  The days too.  Except when they aren´t.  Then you´re transported to an Edenic paradise with forests of timeless green, peaky mountains harbouring eternal snows far above, serene water nourished by sourmilk cascades tracing down cliffs and gullies, all sheathed in a sonic backcloth of bird calls on which to paint contemplation or activity.

Puerto Millabú, a comforting slash in the rocky southern shore of Isla Clemente, was our home for a couple of days, anchored by the river beach at the head of the valley.   The Cascada Salmón beckoned, drawing us to beach then river, through an enchanted Hans Cristian Andersen-esque forest where pixies might have been hiding behind every fallen log, along ledges under small cliffs, and across barenaked rock smoothed by abundantly present rain and wind.   What we optimistically referred to as the trail would have carried stern warnings in a tourist guidebook – myriad routefinding difficulties, easy to lose the trail once you´ve found it, dense and slippery vegetation, steep slopes, exposed steps on a moss-covered tree root between a near vertical bank of loose vegetation and a cliff to cross a stream several metres below, rapidly changeable weather, risk of mist descending, no possibility of assistance.  Wonderful stuff – our sort of hike.  We left temporary markers at critical points that were especially obscure – a ribbon, a hat, a bottle of sunscreen –  and they served us well during the descent.  Lunch found us perched on flat rocks munching granola bars and sipping stream water, pensive and silent, basking in a panoramic view of the upper waterfalls of the Cascada.  Far below Otra Vida swung to her anchor in the bay, dark tendrils of river snaking towards her through grey-green water covered sand.
The following afternoon I downloaded the latest weather forecast : not promising.  We needed a 36 hour window of settled weather to reach and cross the notorious Golfo de Penas, 60 miles of water wide open to the Pacific and therefore to the substantial groundswell radiating from storms that relentlessly pummel the southern ocean between Cape Horn and Antarctica.  As if that was not enough, add in a rapidly shelving bottom amplifying those swells, tidal currents pushing north and south, and intense and frequently changing weather.  It´s a recipe for dangerous wave conditions with anything more than modest winds, and one of our pilot books warns that “even large ships do not cross the gulf in bad weather”.  Finding a 36 hour weather window in Patagonia, we are discovering, is as likely as Donald Trump improving life for ordinary Americans, and rather less likely than finding a herd of pink unicorns.   So, acceding to metrological reality, we replanned our crossing into sections and looked again at the forecast.  Our choice was to leave immediately or wait about a week.  Up with the anchor, quick stowage of loose items below, and on our way within minutes.   Emerging from the protection of Estero Clemente the ocean swell greeted us as we followed a course dodging small islands and shoals through the mist and light rain.  The VHF burst out “Embarcación Otra Vida” summoning Allie to a friendly chat with the captain of a research vessel closing with us through a pass.  “You are very brave” he told Allie, hearing our plans to sail to Puerto Williams. 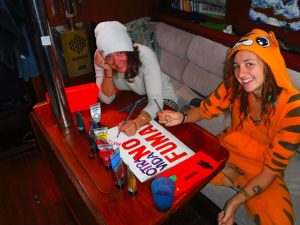 The islands behind us and conditions fairly benign, we discussed options, and jointly decided to continue overnight to Caleta Suarez, a safe and secure anchorage just shy of Cabo Raper at the northern limit of Golfo de Penas.   It was Léa´s first passage in the open ocean on a sailboat, ever, and Allie´s first overnight passage.  Straightforward, chilly, wet … we all had pleasant watches, and even more pleasant slumbers in the warm passage berths, lee cloths holding us in.   Cosily huddled behind the spray hood in the dark, I was reminded how much I enjoy night watches … the tranquillity brought back lovely emotions of those nights at sea between Ecuador and Chile in the last months.
We arrived a little after dawn, our mooring plan for Caleta Suarez at the ready.  Another boat in such a small caleta could add complications, but cruising boats here are as rare as the aforementioned pink unicorns.  As we rounded the corner we noticed the five commercial fishing boats rafted together.  Undeterred, we stuck with our plan, dropping the anchor, launching the dinghy, and tying shore lines to trees.  One of the fishing boats left, manoeuvring around us.  We were almost done, eagerly anticipating a warm drink below, when a fishermen pointed out that our lines would block all movement, including the boats returning later, and invited us to tie up alongside.  Sounds pretty straightforward, but with our anchor down, their anchors down, our lines ashore, their lines ashore, other lines floating on the water … it took an hour or two to sort it all out.  In the rain, of course.  Allie, dressed provocatively in black oilskins and rubber boots while retrieving our shorelines, attracted plenty of interest from the young fishermen. 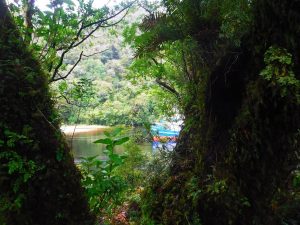 The captain of the fishing boat we tied to gave us two perfectly filleted fish, and we were gifted more fish and seafood later, eventually refusing some as there is only so much fish two women can eat.  Léa reminded us we had bypassed Valentine´s Day so a quick ceviche was rustled up (and a chickpea rice salad for me) while Allie prepared the table with a candle and a white silk rose. We enjoyed a celebratory Valentine´s Day lunch just two days late – who´s counting the days here anyway?
After a few days at anchor waiting for weather, including an attempt to reach a natural hot springs aborted due to too much of the wrong type of wind, Allie and Léa painted a sign to go alongside those of other yachts on a tree ashore.  Otra Vida´s longstanding philosophy, “no rules, no limits”, has evolved, and the sign reflects this: “no rules, no limits, no conspiracy theories.”  Yes, there is a story there … several, actually … but they are for another time, perhaps with a lovely Chilean artisanal beer in hand.
When we fixed the sign to the tree it wasn´t raining.  I take that as a good omen.