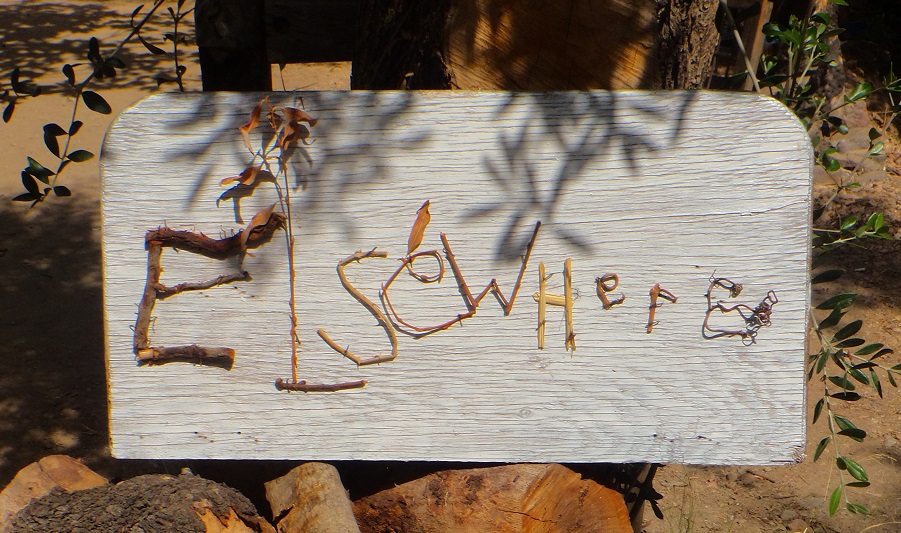 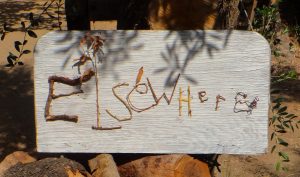 “Elsewhere”. The sign was on a tree in the middle of the pista –  a koan written using twigs – leaving no doubt I was now in the Valle de Sensaciones.

Ken Kesey and the Merry Pranksters memorably set the destination of their bus to “Furthur”, a one word subversion of some of language´s structures and strictures.  The straight jacket of syntax and spelling, obviously, but they did indeed go further, further, further – right up to that wall of impossibility we all crash into when trying to describe the numinous directly in words.  “Elsewhere” has the frisson of subversion too, an invitation to liberty, born of grace and beauty in this special part of the Alpujarras in southern Spain.

As I walk a little further into the Valle, the koan still buzzing around in my mind, the magic unfolds.  Straight lines are few and far between in the Valle, literally and metaphorically.  Windows and doors are framed by tree branches. Broken pottery mosaics add to natural colours, channeling Gaudi and a hint of Hundertwasser.

Where to sleep tonight?  A tree house that moves gently with the breeze? A cave burrowed into a cliff?  A geodesic dome?  A suite built from clay, straw and found wood, with a floor of river boulders?  A bed in the open air in a bamboo forest?  A tepee?  Those are just some of the choices.
Valle de Sensaciones ecovillage was founded by visionary traveller and intentional community veteran Achim Burkard 15 years ago in a steep sided canyon close to the tiny village of Yatór.  It is almost invisible – this is not somewhere stumbled upon in a one week rental car tour of the hills around Granada. Abundant sunshine grants solar power and warm afternoons of contemplation, and a stream provides for the pool and the shower.  Exploratory and experimental programs run in the Valle each year, one of which, as I later found out, is titled “Elsewhere”, the genesis of the sign.

At the Valle you do without grid water and grid electricity.  You do without mass produced food.  You do without TV, radio, broadcast media of any type.  You do without pretension, without façade, without status, without competition, without organized religion, without coercion to conform.  You mostly do without money. Freedom is always present, softly pervasive, largely unspoken because nothing needs to be said.  It´s a seductive inversion of mainstream consciousness demonstrating another way to live.  Connection, honesty, community, love, trust – these are the currencies of the Valle.
The mealtime gong provides percussion to the gentle flow of each day.  Cooking and housekeeping are shared communal activities, each selecting how to contribute in accordance with their mood.  It works, contrary to the fallacy of “economic man”, because it is powered by a deep desire to contribute rather than by a socially constructed competitiveness to own and “win”.

A day might include reading in one of the hammocks, creativity with wood, clay or paint, helping complete the naturally built moon temple or some mosaics, sitting on sofas in the “living room” energised by conversation and eating almonds, a celebration of the equinox in the medicine wheel, or floating on an air mattress on the pool gently drifting under an olive tree with the light breeze. (Needless to say, the pool is not sterile, blue and square – it is circular, built with rocks and love, filled by continually flowing stream water).

But for all that I am writing about place, the Valle de Sensaciones is not primarily a place – it is something beyond place. It is a philosophy of how to live an engaged fulfilling life in harmony with the planet, crystallized into a material physical form.  A manifest example of psychogeography, where every moment is part of an extended non-urban dérive (and, significantly, without the need for abundant alcohol to lubricate the flow of magic).  Conversations here run deep and wide, and no subjects are off limits, the constricted and calculated semi-communication of bourgeois society having been left on the tarmac road outside.

It´s Sunday evening. The full moon rises over the fig tree bright and clear in the starry Andalusian sky.  Later on its journey it will transform into a blood moon for few short hours.  Ribbons of Johanna´s sweet rainbow songs soften the air, Achim´s accompanying drum beat tasting of freedom and Africa.  The smoke rising from the campfire blends with lingering pirouettes of cactus, the glow of faces with cheeks aching from day-long perma-smiles immanent in the warmth.  I reach up to the vines growing overhead and we feast on grapes.  Looking around slowly as everything merges, thoughts vanishing, my heart spiralling off to a place beyond words … an eternity or a moment, what does it matter … how could this be any more perfect?