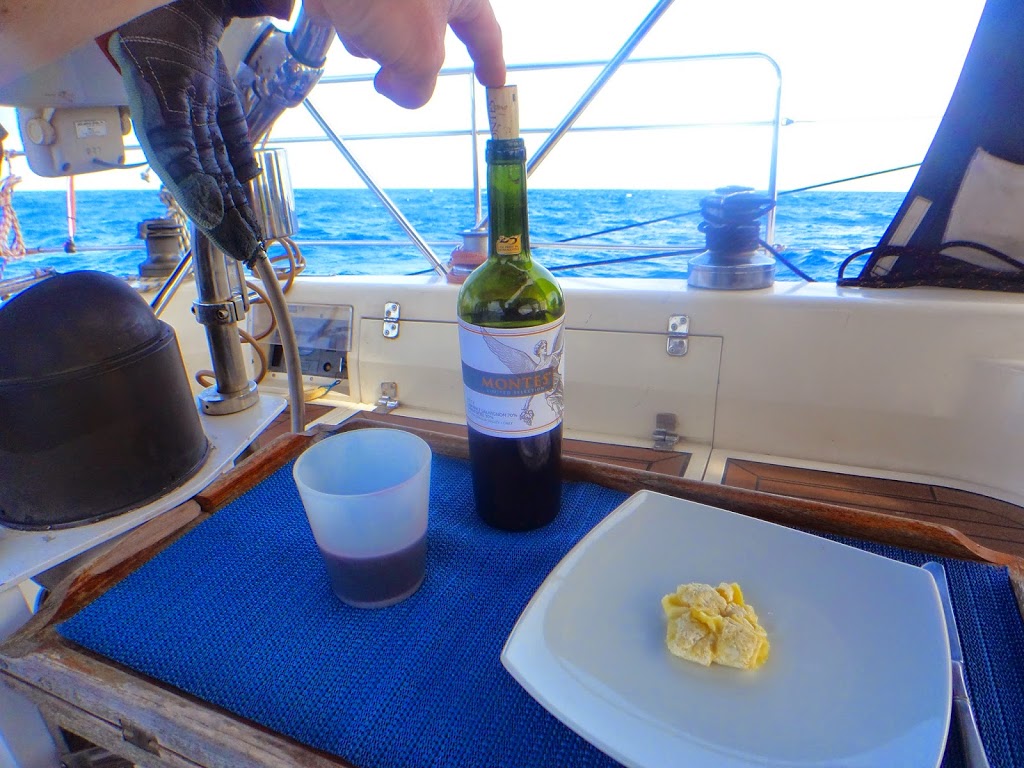 It´s Tuesday afternoon on a passage between Jamaica and Honduras, and in the shade of the bimini I am nibbling the last of a decent Camembert purchased 3 weeks ago in St Martin and sipping a glass of tolerable Montes Cabernet Carmenere.  This is unusual, as I essentially never drink alcohol on passage, but yesterday was my very good friend Jeff´s birthday, and I promised I would drink a toast to him at sunset last night … hence the open bottle today.

An hour after opening the bottle for yesterday´s toast to Jeff´s birthday my gennaker abruptly shredded.  And it really, really shredded.  I presume it must have torn near the top of the sail.  The whole of the sail seemed to have unzipped down both sides leaving just two tapes running to a small patch of sail near the sock and halyard, plus a mass of sail in the water.  It was almost dark, and with the lack of forward movement from the lost sail the boat was rolling significantly.  OK, on with the harness, drag the remnants onto deck, secure it overnight to hopefully dry a bit, and then up with the genoa, a considerably smaller sail.  Repacking the sail in daylight, the level of destruction I saw makes me wonder if the gennaker is even worth repairing, but I will wait until talking with a sailmaker, hopefully in Guatemala, to make a decision.
It will take a bit longer to get to Honduras but this is not a problem.  It is several years since I stopped trying to sail to a schedule – a futile activity resulting only in distress and regret.  Passages have to be flexible in time and to some extent destination, and Otra Vida is now moving along at a leisurely 4kts rather than the 6kts that the gennaker would have given, but life is fine indeed with a glass of wine and a bite of cheese, and a playlist of Lou Reed, Crass, Ani di Franco and others playing in the background.
One afternoon in the 1930s Bertrand Russell, by then in his 50s, was staying at the house of a friend in France.  Sitting in the garden, quite possibly with a glass of wine and a piece of camembert, contemplating life, he noticed an apricot tree.  His sparkling mind thus stimulated, he decided to spend the afternoon learning about apricots, and among the facts discovered that apricot has the same root as precocious because it fruits early in the season.  He learned many other things about apricots that day, and commented that at the end of the day the apricot tasted all the sweeter and more enjoyable for the knowledge he had gained.  That idyllic day became a part of one of his wonderful essays, “On ´Useless´ Knowledge”.  It is a classic Russell essay, an argument for education rather than training, for a festival of intellectual growth and discovery as a pleasurable and worthwhile end in itself.  (One can only wonder what he would have made of the celebratory anti-intellectualism prevalent in many areas of contemporary western life.  I think it can be said with certainty that he would not have remained on the sidelines).
Apricot trees in a garden in France might at first glance seem a long way from the fairly remote part of the Caribbean Sea I am now on, or from the jungle rivers of the north east South America, Otra Vida´s sailing grounds in late 2014, but there is an interesting parallel in the concept of uselessness.
Almost all the land of French Guiana, Suriname and Guyana is useless.  The rivers that run through the land are mostly useless.  And this part of the Caribbean, a hundred or so miles west of Jamaica, several hundred miles north east of Nicaragua is most certainly useless.  Too deep for hydrocarbon exploitation, and far less useful for fishing than the shallower banks south of Jamaica.
It is specifically uselessness that has allowed these places to remain largely pristine and flourishing, undamaged by the prevailing economic system.

“Sign and signification, activity and culture, living and understanding are dissociated … activities devoid of meaning are organised according to the model of the machine, a model whose purpose lies outside itself, which does not question that purpose.  A mechanistic economy, whose principle is the search for an optimal relation between expenditure and production, is imposed as the rule of all activities…”  – Jean-François Lyotard

In first world countries useless land is often assigned some sort of designation: National Park, Wildlife Refuge, Wilderness, Tribal Land, Reservation, and so on.  Sometimes the initial move for classification and protection was by visionary individuals with genuinely high ideals, in other cases by indigenous people desperate to stop cultural genocide.  But sadly high ideals and moral appeals are insufficient when there is economic activity at stake.  In a number of cases, as soon as some economic use for the land was found there were concerted efforts to chip away at protections.  Several particularly cynical political figures come to mind, loudly proclaiming their green credentials for “protecting” land that was considered useless, then promptly fighting that protection when oil, shale, gas, “useful” timber, or some other means of economic exploitation is found.  Remember “drill, baby, drill“?  And should anyone be imprudent enough to protest this, the time honoured tradition of incarceration is invoked for the unforgivable crime of camping in a place inconvenient to the establishment.
Guyana´s wealthiest town, Bartica, where Otra Vida spent some time at anchor, is a gold mining service town.  Wealthy is relative, and no one would call Bartica a wealthy place by western standards, but by Guyanese standards it has money flowing in abundance.  The town is gritty and edgy, a frontier town of short term profiteering, feeling like it could become violent quickly, although it remained calm while we were there.  The gold miners, legal and illegal, come into town from the goldfields to reprovision, sell their gold, and let off steam in the bars and brothels.
What does this type of gold mining look like?  Well, a large barge, say 25m x 10m, will have a huge dredging pump on it, driven by an equally large diesel motor.  The dredge, somewhat similar to a monster-sized vacuum cleaner, sucks up the sediment and grit on the bottom of the river and passes it over a series of riffles which allow the gold dust to separate out from the mud and grit.  The mud and grit go back into the river at the back of the barge, while the gold is collected by the miners.  A typical barge will consume 1100l of diesel in 24 hours, employ two dozen or so miners on a share basis, and produce 20-30oz of gold dust a day.  In other words 1100 litres of diesel (5 large drums) and a huge amount of river bed torn up yield less than a handful of gold dust.  One can only imagine the impact of this on the local ecosystem, not to mention the environmental costs of production, transportation and consumption of so much diesel.  For a handful of gold dust.
The upper parts of the rivers are now no longer easily navigable because of the spoil piles.  The jungle nearby is being destroyed when a natural depression is found as gold dust is likely to have accumulated there over thousands of years.  The first thing is to clear cut the depression, then dam and flood it, and then use the same dredging technique, but with the equipment brought in on large ex military vehicles on one-time-use roads cut through previously untouched jungle.
Local tribes who have lived in the area from pre-Columbian times have from time to time objected to the destruction of their land.  They have been threatened and sometimes killed.
All of this makes complete economic sense – it is profitable.  But from any other perspective it is insane. The desperate focus worldwide on GDP growth hides within it many situations which are utterly nonsensical viewed in any other context.
Thankfully the rainforest jungle is resilient and regrows quickly.  Islands that had houses are quickly overgrown when people leave.  Hopefully, if nothing else “useful” is discovered, in a generation or two gold mining will be just a traumatic memory.
It is such a privilege to be able to see and experience “useless” places on the planet.  Get a hundred miles offshore and you are usually in a world unchanged by man.  Follow a jungle river upstream and you find untouched nature.  Sail to an economically useless island and it remains pristine.  In 1899 the last unclaimed lands, the terra incognita, were annexed by the then dominant empires, and the real frontier died.  Jerome Fitzgerald, an interesting and somewhat controversial sailing author, talks about cruising on a sailboat as the “last viable frontier”.  On the best days, in remote places, it is easy to agree with his view.
Time for another glass of wine.
(Oops, a couple of seconds after that first picture a wave hit beam on, knocking me just enough off balance to let the bottle fall over, hitting the wine beaker, splashing wine over the camembert and making my leg look like I had been crushing grapes in a vat.  The Kindle is thankfully OK.  Such is the sailing life).

One Reply to “Useless Land”