Normally we like to set off on multi-day passages in the morning, giving us plenty of time to navigate away from land, get into clean air, and get the sails set before dark.  Leaving Tenerife we only got started at 5pm, and motored south in the windshadow of Mount Teide.  The current and the swell collide around the bottom of the island.  Add in very local southerly winds, then the NE trades a little further on, and conditions were uncomfortable to say the least.  Wild rolling, short steep waves from different directions, wind and waves in opposition at times – seasickness conditions par excellence, although with the help of Dramamine this time fortunately neither of us became ill.  It took us about 3 hours to get to relatively orderly waters and more stable winds, by which time it was twilight, so only the genoa went up.  By midnight the sea conditions were normal, and we were into trade wind sailing.  We were both extremely tired though, and getting through each watch was hard work – straight into the starboard passage bunk the minute the other had vacated it.
﻿﻿

By lunchtime we were awake enough to sort out our sails properly and to try a new approach to downwind sailing inspired in part by an idea in Don Street´s Cape Verde pilot.  The 150% roller-reefing genoa is fully extended, and sheeted through a large snatch block on the end of the boom.  On the inner forestay we hoisted our “get us home” jib, a relatively small jib that I had made a few years ago as a backup sail in the event of dismasting – slightly heavier sailcloth, flattish cut, hank on luff.  The jib is poled out slightly forward of the beam using our shorter spinnaker pole.  Both sails were sheeted quite flat and led back to the blocks near the stern we use for gennaker sheets.

The smaller jib seems to materially reduce induced roll, as well as giving us an extra half knot or so.  The idea with this set up is also that we can reduce sail quite easily if the wind pipes up – just roller-reef the genoa to reduce sail area.  The jib would be fine in a lot of wind … I think 45kts, maybe more … so if we were caught in a nasty squall by rolling the genoa all the way in we have a manageable amount of sail area.
﻿﻿﻿

Our speed on the passage averaged 6.7kts, a very respectable performance for Otra Vida, with classic trade winds of 16-28 kts true at our backs.  We felt that we were speeding towards a small new beginning: when landfall came we would no longer be in Europe. When will Otra Vida next see Europe?  I have no idea.  Perhaps 5 years, perhaps 20 years.  There is, literally, a whole world in front of us.  After the Cape Verdes group we’ll cross to northern Brazil – a new continent, new countries, new cultures, new people to meet, new food to eat.   So much to learn, so much to revel in.

3 ½ days into our passage we passed 20N, for me the mental delimiter of the tropics.  At 4.30am it didn´t feel tropical, with an air temperature of about 20C, although the humidity in the cabin notched up from 72% to 80% and cushions felt slightly wet to the touch.  The old sailing directions for crossing the Atlantic to the Caribbean are to sail south until the butter melts, then turn right.  The butter is still solid, and shorts-and-t-shirt night watches haven´t arrived yet, but they are not far away.

It felt like our first proper ocean passage since returning from the Caribbean.  The difference is the remoteness.  From Rabat to the Canaries we sailed about 500nm, but the route parallels the coast of Morocco some 20-30nm offshore for the first third, and on that portion you can see lighthouses and city lights at night.  This passage, on the other hand, was 200nm+ offshore for the whole of its 760nm – definitely an ocean passage between islands.

We saw almost no traffic.   Just one freighter and one large passenger liner, and nothing else showed up on AIS at 48nm range the whole time.  We became a bit lazier in our watchkeeping, setting the radar on a 20 minute schedule scanning an 8nm radius from us.  We still kept our 100% live watch regime (of course) but the quick scan of radar every time it beeps to life was the norm, with occasional visual lookouts.  There was just nothing out there.  Quite different from the last time I was in this approximate area, crossing the Atlantic as part of the ARC, when I knew there were another 250 or so pleasure boats reasonably close by.

The trade wind sailing was easy and lovely. With the new downwind sail approach it was even more comfortable, and maybe half the time the main cabin was so calm it felt like being at anchor, even though we were speeding along at close to 7 knots.  The other half of the time we had some rolling, and it seemed to be caused by apparently random changes in the wave patterns.  I say apparently random because I suspect it might have been related to tidal flow, or perhaps a slight difference in wind angle, or wind intensity.  Even still, the rolling was not so bad – we´ve been in worse anchorages.

Talking of anchorages, a big step forwards in comfort in the Canaries was the use of flopper stoppers.  These are devices that reduce rolling at anchor considerably by providing resistance in one direction only.  We started experimenting with the standard minimum, a bucket filled with water suspended from the boom just at sea level.  When the boat heels away from the bucket, the bucket and water are lifted out, providing say 10kg of weight, whereas when the boat heels towards the bucket, the bucket is submerged and is almost neutral in weight.  Even this has a good effect on rolling.  There are a few designs of flopper stoppers that build on this concept, including a triangle weighted at the tip that dives down, an ingenious proprietary metal folding device, a milk crate with a plastic flap on the bottom, and a metal grid with a plastic flap on top.   After building and testing several options we settled on getting two quite large metal grids fabricated, and covered them with mesh and plastic fabric with two slits.  The result is remarkable.  Untenably swelly anchorages suddenly become acceptable – not just tolerable, but acceptable.  I don’t know how we survived for so long without them.
﻿﻿
﻿﻿﻿﻿

We arrived in Palmeira, Sal at 10am local time, a passage of just 4 days 18h for 762nm.  The port is wonderfully sheltered from the swell and waves generated by the trade winds, but the wind itself blows over the low island and across the beach to where Otra Vida is gently swinging to her anchor.   The water is green, the sky blue, a rusty freighter is being unloaded at the dock by stevedores, the watermaker is happily chirping away, our dinghy bobs around behind the boat, nothing much is going on and that is just how it should be.  We went ashore to sort out formalities: finding the port policeman, who was apparently cycling around the town, and then to the airport for immigration and visa stamps.  Coming back we stopped at a bar on the waterfront – a wonderful melange of yachties, travellers, fishermen and local people.   The French guy living on a boat here with his Cape Verdian girlfriend and young kids, who came here a few years ago on another sailboat, didn’t get on with the captain, and decided to stay.  A Cape Verdian women born in Rotterdam, very sociable and somewhat drunk by noon, talking with everyone and anyone.  A Catalan delivery skipper, Rafa, taking a Janneau to northern Columbia for a season.  A local Rasta fisherman speaking good Spanish, giving us advice on where to catch fish.  Two French twenty-somethings, Tif and Clement, who drove down to Dakar and came here on a sailboat, now looking for a ride to the Caribbean.  A Dutch guy living on his boat here when he has money, and returning to Zeeland to work when the money runs out.  And a Brit and an Estonian sipping landfall drinks and soaking it all in.

There’s a feeling of welcome here.  The sea and sky welcome us, the stars shine more brightly in the nighttime tropical sky.  It’s good to be in the tropics again! 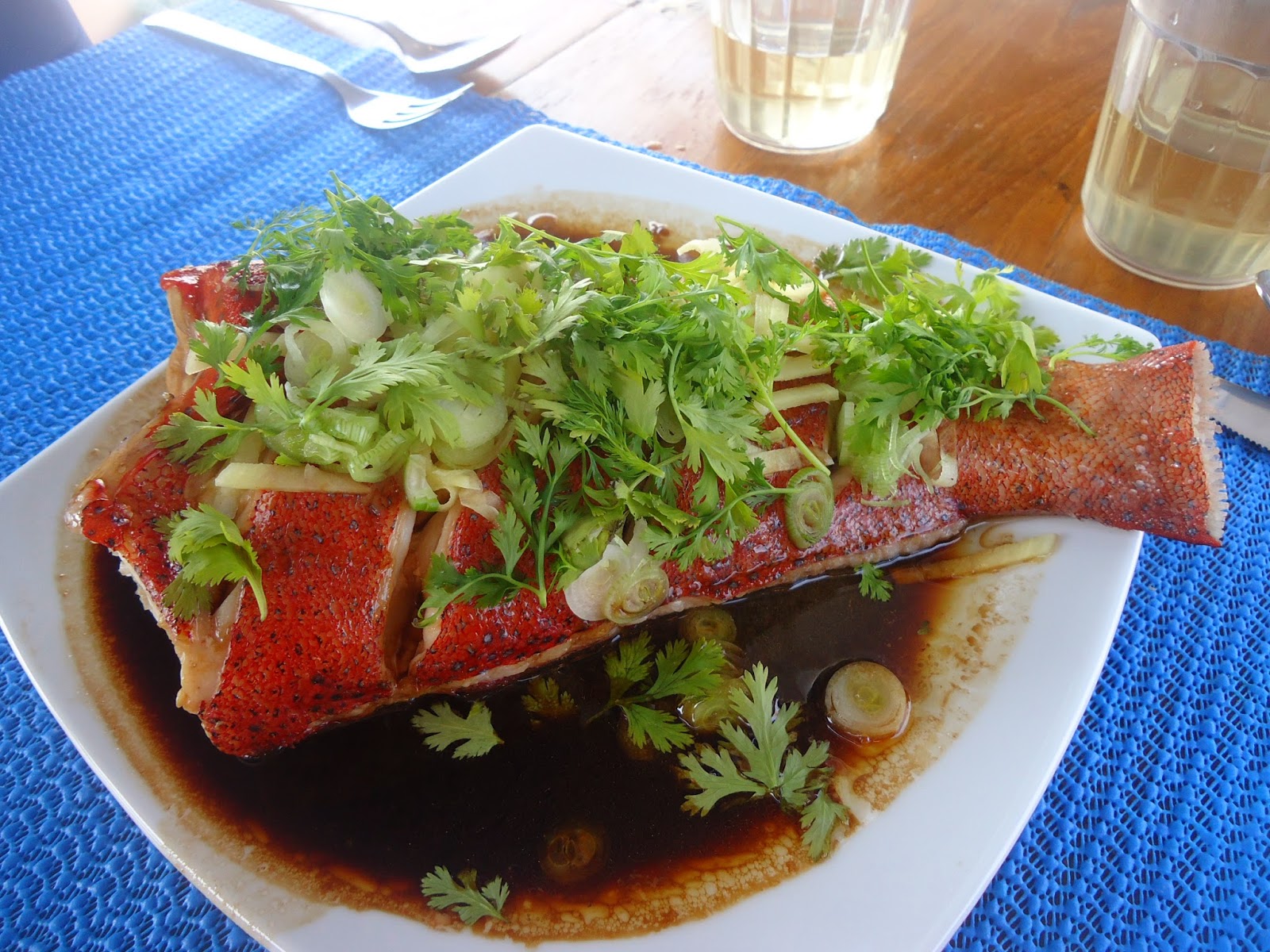