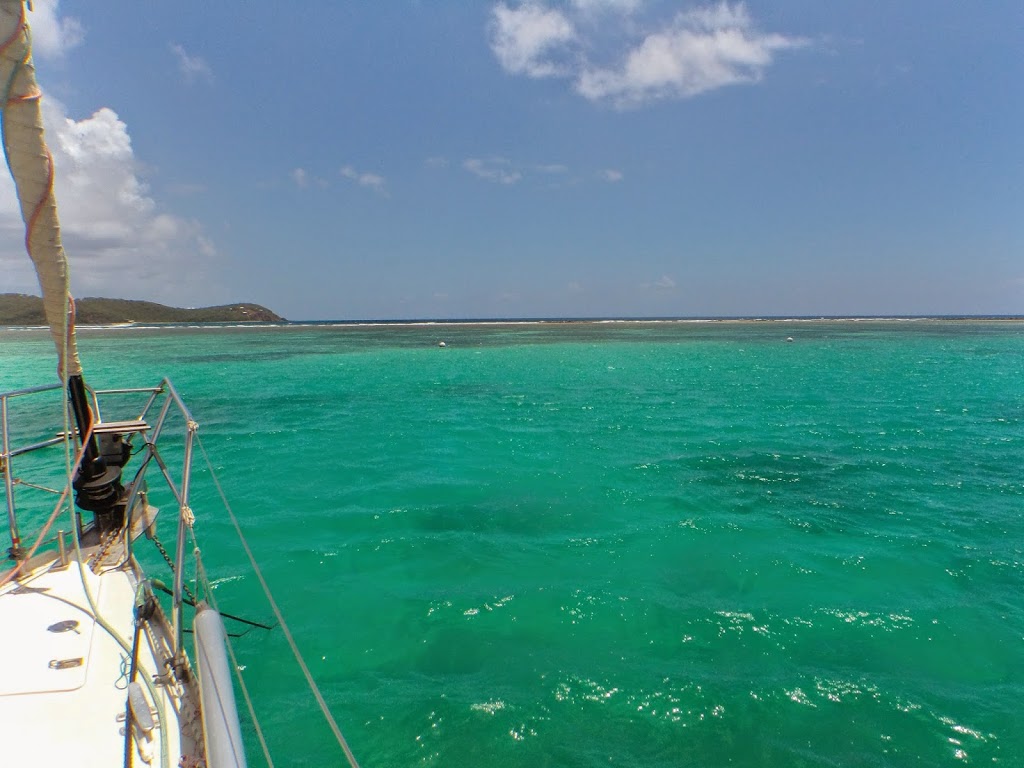 The view from the hammock is of gin-clear turquoise green water to the reef a few hundred meters in front of Otra Vida.  The sea beyond pushes whitecapped waves to break on the reef, and after the reef the water is only lightly rippled by the friendly trade winds from the east.  The anchorage is tranquil.  There is a wooded headland straight ahead, and on the horizon the bleached rock of Frenchcap Cay, part of the US Virgin Islands, looks like an iceberg in the afternoon sunshine.

I am not much of a fan of the Eastern Caribbean islands.  The atmosphere and style of living immortalised in song is long, long gone, mostly replaced by resorts, hotels, contrived bars and uninspiring restaurants catering to short term vacationers and cruise ship visitors.   There is nothing wrong with this – people are making a living – but it doesn’t do it for me.  Sailing up the chain this time I chose to skip most of them, visiting only Grenada, St Maarten and Puerto Rico.

Otra Vida´s short stop at Grenada, anchored off Hog Island, was delightful and surprising.  It is quite unlike Trinidad to the south or the Grenadines and other islands further north.  Sunday afternoon at Roger´s Bar on Hog Island is legendary, and rightly so: the stuff that Caribbean dreams really are made of.
St Maarten I knew from 2011, and it is what it is : a superb provisioning and refitting stop with a large yachtie community that congregates around some rather good yachtie bars.  It is mostly long term yachties, and the atmosphere is agreeable.  I like St Maarten, but wouldn’t choose to stay there more than a week or two.
Culebra, though, is special, and perhaps is what the Caribbean was like when Jimmy Buffett and Herman Wouk wrote about it.  Uncrowded, with mostly long term cruisers anchored in the bays, some local boats, and a few larger sport boats of wealthy Puerto Ricans from the mainland having a weekend away.  There are a handful of bars and restaurants, all of the barefoot variety, many with small docks to tie up your dinghy.  Everyone is friendly.  Even checking in with Customs and Immigration was a delight.
Culebra´s only claim to international fame is Flamingo Beach, rated 3rd best beach in the world by someone who keeps count of these things.  It is a lovely spot, a curved bay with perfect palm trees, turquoise water, soft white sand.  Naturally it is a bit more commercialised and a bit more crowded, but not excessively so.
Flamingo Beach aside, the rest of Culebra is a very special place, thankfully not yet of international note.  The Dinghy Dock bar is the centre of yachtie and shoreside social life and is never dull.
On the western end of Puerto Rico is another gem, Boquerón.  A place that could actually pass as Margaritaville, rather than the Margaritaville theme park feel of the Virgin Islands.
The sun falls behind a hill a quarter mile aft of Otra Vida.  The sky changes quickly to dusk and the first stars appear in the sky above the stars created by sailboat masthead lights in the anchorages.  The loom of St Thomas, an orange-yellow flare into the sky in one spot to the east, is in distinct contrast to the lack of loom from the necklace of lights along Culebra´s tiny main settlement at the head of the bay.  An hour or so later the full moon starts to rise, orange-yellow too but much cleaner and brighter, gradually lightening to cream as it rises.  A few strategically placed small clouds complete the picture.   To the left the insistent sound of crickets in trees, to the right the soothing sounds of waves gently breaking on the reef.
I could easily spend longer here, but this time I cannot: I am on a mission.  My mother had a significant stroke in February and my sister and I continue to work on her rehabilitation.  The only reason I am sailing now is to get Otra Vida to a safe place before hurricane season. There is another 1100nm of sailing to be done in the coming weeks before I return to the UK by plane from Guatemala.  There is no conflict in this decision – my place is in the UK with family.  Nonetheless, I wish I had come across Culebra earlier. It would be a worthy destination to point the boat at when crossing the Atlantic.