Otra Vida was built in 1991 to a well proven Bill Dixon design. Moodys constructed in that era were heavily built with a thick, solid fibreglass hull and a cored fibreglass deck.

I bought Otra Vida in 2005 in Barcelona, where she was in moderate condition being used as a floating home by a young couple.  The original owners sailed her around the world in the 1990s, and the next owners used her as a family vacation boat in the Mediterranean.

The boat has a relatively shallow draft of about 1.45m when fully provisioned, and is quite sea-kindly.  The keel is a Scheel keel, an early version of what eventually evolved to became a bulb keel, and is fairly long.  The keel attachment area of the hull is extremely strong, and the keel is attached by 11 keel bolts. 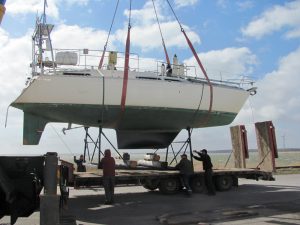