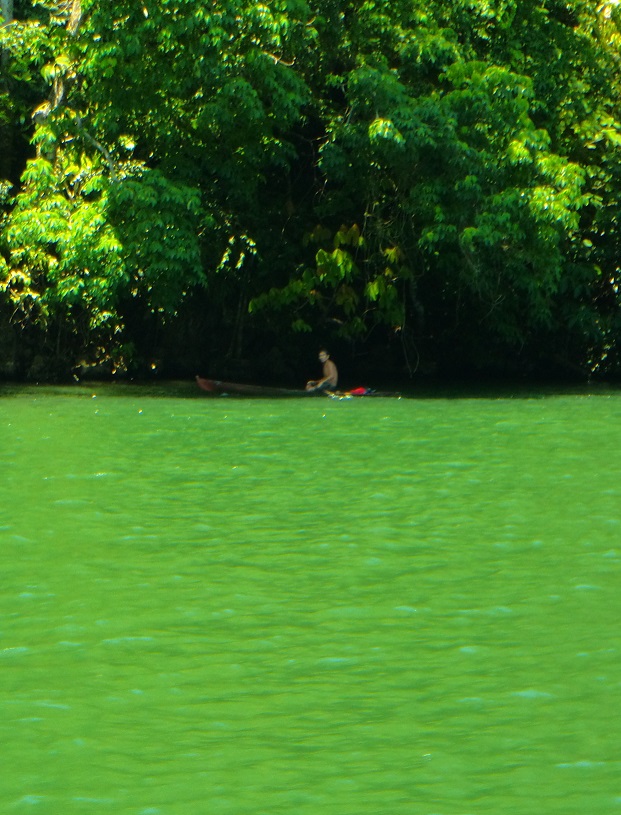 Approaching the Rio Dulce means stepping back into the world of jungle rivers, a world of great beauty that I finally tired of after three months of muddy water at the end of 2014.  Five months distance from that last jungle river in Guyana, though, and things feel different.  Entering the Rio feels like coming home.  I´ll follow this jungle river for just 20 miles, and it´s a little different because it has cliffs and rainforest towering 100m above the river.  But it also feels so very familiar – all the experience gained in the three Guyanas from trying to feel Otra Vida´s way along uncharted rivers comes back, and this river is so easy in comparison.  It´s reassuringly familiar.  Progressing upriver the world suddenly explodes with life: yellow butterflies, white egrets, jungle sounds, lush vegetation, the bird life – oh the bird life!
In the last few days anchored at Roatan I´ve been devouring Naomi Klein´s “This Changes Everything”, which makes the case rather well for the incompatibility of neoliberal ideology with continued human life on earth.  Last night out on the open sea, looking up at a full moon and the stars beyond it, realising that we have screwed up – perhaps irrevocably – the only planet we are certain we can inhabit, feeling the immensity of the universe, and what a wasted opportunity it has been … we blew it for the right to have commuter flights, cheap boozy weekends away, SUVs to go to the shopping mall, jet skis, inexpensive imports from low wage countries.   I´ve been guilty of everything on that list except jet skis, and more too, most of all the insane overuse of commuter flights during my years in business.  And here and now, in this lush, fecund, green, living jungle canyon, the hard truth of the impending environmental catastrophe seems incomprehensible.
July: Tamera intentional community, Portugal
Fast forward two months to the Alentejo hills in southern Portugal, on a one week introductory visit to the eco village of Tamera.  Tamera was started in 1995 by a small group of German intellectuals dedicated to exploring ways in which people can live peacefully with each other and with the planet and now has 150+ residents.   It´s a remarkable place.
Environmentalism is an important part of the project.  The Alentejo is suffering from desertification primarily stemming from deforestation, and the Tamera community is repairing the land on which it lives.  Lakes have been built to capture the abundant rain that falls for a few months each year, which otherwise runs off the hills cleared of undergrowth.  The water table has been raised significantly, and scrub under cork trees is being reintroduced with mulching to capture residual moisture.  Tamera´s site is now noticeably greener than surrounding areas.
Energy autonomy is another area of research.  Tamera is reducing the human footprint on the planet and empowering people in remote areas with innovations such as simple solar ovens (the mirrors are made from recycled printer cartridges) and localised biogas production using vegetable food scraps.  Both are practical options for anywhere warm, i.e. most of the third world.
A permaculture philosophy is followed when growing crops, and animals are worked with cooperatively to assist with farming.  For example pigs are used to plough new areas of land.  The community is mostly vegan out of choice, although this is not mandatory.
All of these aspects of Tamera are impressive and humbling, and they flow from a core philosophy of moving beyond competition and separation to community and cooperation.  At the centre of the core are human relationships – the area where most communities and groups in the past have foundered.
Tamera´s founders had a specific vision of how to build a new model community: elimination of fear in an environment of trust.  In the context of everyday society these words are so devalued we no longer consider them to be anything but platitudes.
Tamera´s definition of peace is living without fear.  Living without fear of violence – yes, of course.  More than that though – living without fear of rejection, of judgement, of censure, of ridicule, of shunning.
Imagine a situation where you could express any thought or desire without fear.  Then imagine that in doing so you are not saying it only for yourself but on behalf of all humanity with yourself as a specimen.  You and a group explore your feelings and thoughts, as a particular instance of the universal (or at least the everyday), and see what can be learned.  No judgement, no rejection.  A beautifully open interchange where people recognise and acknowledge the same thoughts and feelings in themselves.
There are many things we don’t express because socialisation instils in us that doing so will release dangerous energies in ourselves that cannot easily be contained.  Unfortunately these thoughts, desires and emotions don’t go away when they are repressed. To name but a few: power, greed, jealousy, sex, love, control, religion.  Mainstream society tells us these areas can only be expressed in a very limited way regulated by strong social controls and sanctions.  Edmund Burke´s requirement for an external authority to impose discipline talks to this, as do the darker consequences of Isiah Berlin´s concepts of positive and negative liberty.  Tamera rejects these views resoundingly, seeing them as both the cause and the result of much personal trauma and social strife.
The experiment in a different approach to living has been underway in Tamera for 20 years now.  The difference is quickly evident.  People smile, people are friendly, there is much more hugging and eye contact than in the outside world, people are happy to talk with each other, there is trust between people – trust in motive, trust in action.  People cooperate with each other very naturally.  Working together flows easily. People seem genuinely happy and content.  Tamera is perhaps known most for its free love philosophy, and certainly this is an important element in living without fear of judgement and rejection, but in reality it is but one aspect of a whole philosophy of freedom.

So, is this just a utopian dream?  Well, it is utopian, but it is not a dream.  It is real and it is on the ground in southern Portugal.  Tamera continues to be a community with almost no interest in money or power – it has not lost its vision.   Perfect?  No, of course not.  Minor issues come up from time to time.  For example, there are no locks anywhere in Tamera, and there have been a handful of minor incidents of theft.   There is a little too much adulation for the founders for my taste, brilliant though they are.  But 20 years into the experiment it is a community that, to me, is by far the best functioning one I have come across.  It is a tangible real world example of how life could be different and better for us all, proof that The More Beautiful World Our Hearts Know Is Possible is more than the title of a book.﻿﻿ 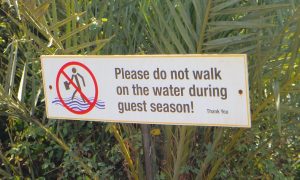 Leaving Tamera and re-entering the mainstream world is when the difference really hits home.   Suddenly you notice the extraordinary lack of connection people have with each other, the walls that people erect around themselves to avoid connection, the averted eyes, the lack of physical contact, the isolation, the lack of trust, the fear, the atomisation of society.  It is stark and sharp and painful, like a volley of arrows hitting your newly sensitised soft skin.
Within a week the magic starts to fade as the lifelong conditioning kicks back in. You start to separate yourself from others, start to let those walls of protection rise up again.  You stop looking people in the eye and smiling.  Trust fades like the morning mist in the Portuguese hills. You begin to see Tamera as just a dream, a pleasant excursion into a fantasy world, a utopian illusion.
But it isn’t.