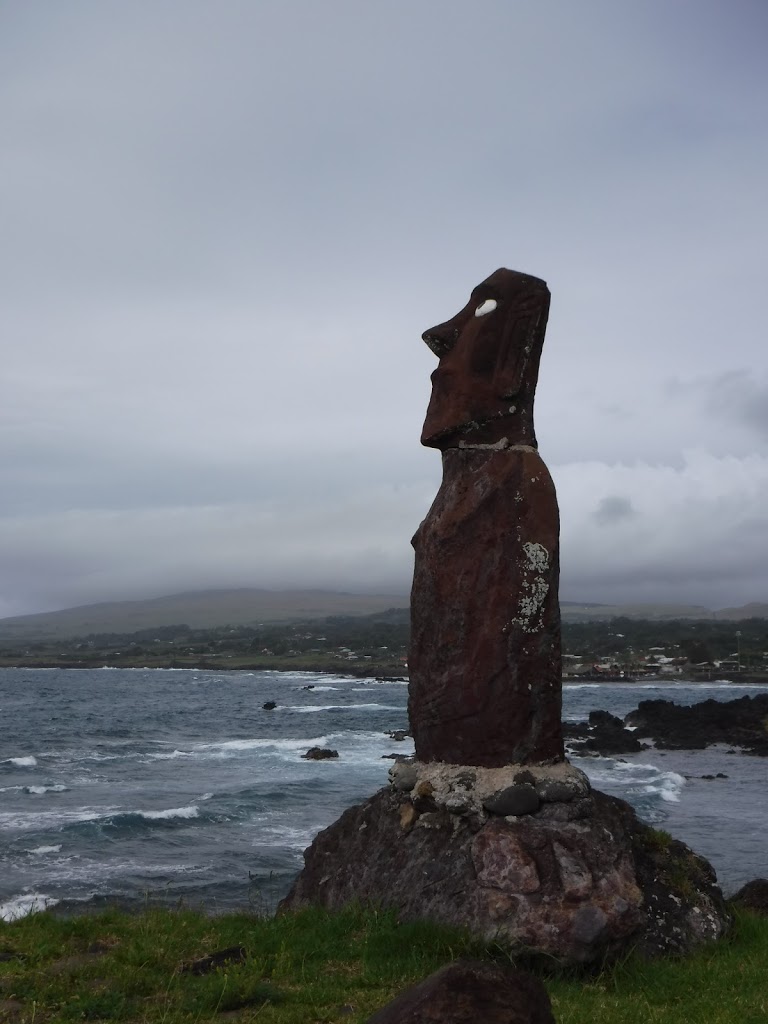 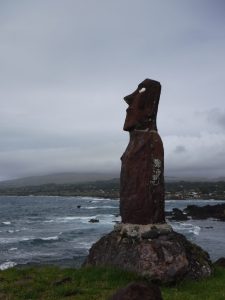 “… on this island the Wind God inhabits
the only church living and true:
our lives come and go, dying, making love:
here on Easter Island where everything is altar,
where everything is a workroom for the unknown,
a woman nurses her newborn
upon the same steps that her gods tread.

Here, they live! But do we?
We transients, followers of the wrong star,
were shipwrecked on this island as in a lagoon,
like in a lake in which all distances end,
on a motionless journey, so difficult for men.”

Men IX, La Rosa Separada, Pablo Neruda
We arrived at Easter Island after a lovely 23 day trade wind passage from Ecuador, port tack all the way, barely adjusting our sails, life lived at a 20 degree angle.   Rashly ignoring nautical tradition, we left on a Friday and had a woman aboard so probably we should have sunk.  As you are reading this obviously we didn’t.  Another small nail in the coffins of patriarchy and superstition.
During the passage I read Jared Diamond’s “Collapse: How Societies Choose to Fail or Survive”.  I chose it because it sounded interesting, and it was a surprise to find Easter Island as one of his case studies.  To précis the book: he examines historical and contemporary societies that have thrived or failed, and teases out five substantive themes: environmental damage; climate change; hostile neighbours; friendly trade partners; and the society’s response to environmental challenges.

Easter Island was occupied by Polynesians from island groups to the West in about 900AD.  The population is estimated to have grown to about 15,000, and then declined to about 3,000 by the time the first Europeans sighted it in 1722.  By then it was already an ecological disaster, with no significant trees left standing, and its population was barely surviving  The iconic moai (stone head statues) were there in profusion, extravagantly contrasting with the poverty of the islanders. 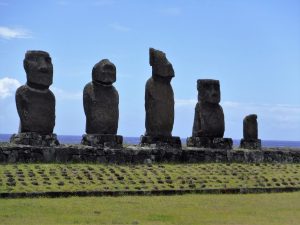 What had happened? Diamond meticulously brings together strands of scholarship, describing how the Polynesians developed a two class society, with aristocrats living in large houses in prime locations, and peasants farming the land.  Over time the felling of trees, used for house construction, cooking, elaborate cremation rituals, and for moving the large stone statues from the quarry to their final sites, denuded the island.  The response of the aristocrats appears to have been to erect ever greater monuments as power struggles developed between rival chiefs.  What had been an island capable of supporting its population became an ecological wasteland driven by the vanities and egos of the ruling elite and their ever more elaborate traditions.  Unsurprisingly, following the immiseration of much of the population, the aristocracy was overthrown, but it was too late – the forests had gone.  Soil erosion accelerated without trees to moderate the effects of rain and wind.  Heating and cooking was only possible by burning grass.  Game animals died out with the forests, cutting off that food source.  Lacking large trees, large canoes could no longer be built, limiting fishing to what could be caught in sheltered waters very close to the coast.  Chickens and rats became the main sources of protein. 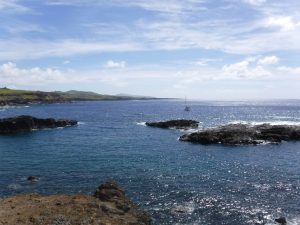 Of course, while the Polynesians destroyed the forests and reduced the population by 80% from its peak, western imperialism takes second place to no one in these matters.  By 1877 the population had been reduced a further 96% to a mere 111 inhabitants through a combination of disease deposited by Christian missionaries, slave raids by Peruvians, and profiteering by the European chancers that imperialism regularly excreted into occupied lands.  Every Easter Island Polynesian today is descended from one of the 36 survivors who had children.

Given the history one might expect the Polynesians to be unwelcoming to those of us from western nations still carrying an imperial stain. Not a bit of it.  Warm, friendly, sharing, willing to help … the culture of the island seems grounded in welcoming hospitality and mutual support.   Going into Hanga Roa by dinghy the first evening we were swamped by several breaking waves.  Local fishermen hoisted our dinghy onto the dock and gave us a hand up from the water, then put glasses of whisky-cola in our hands and invited us to share their barbequed fish while they got to work saving the drowned outboard motor.   As the evening continued we were invited to stay in one of their houses rather than return to the boat in our wet clothes.

There´s a happy and relaxed feeling to the island.  People have enough to live on, and there seems to be neither obvious poverty nor ostentatious displays of wealth.   People have time to talk and want to get to know you.  Within hours I felt I had friends on the island. 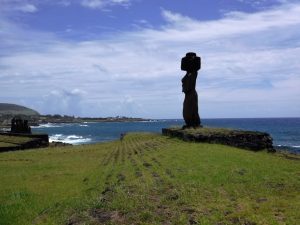 Was our reception coloured by our arrival by sailboat?  Of course, to some extent.  Significant numbers of tourists fly into the island for a few days vacation, apparently 5000 a week in peak season. Travelling here by sailboat takes a bit more effort, and Otra Vida was only the 23rdsailboat to arrive at the island in the previous year.  Compared to the volume of boats at the average Caribbean island that is a rounding error, sure.  Then again, an average of two sailboats a month means that sailboat crew are not so unusual on Easter Island.

The model underlying western capitalism, the model of rational economic man, says that our nature as people is to be competitive, to maximise our own self interest, if necessary using violence.  It says that these dark base instincts need to be controlled by strong social rules and norms, backed up by the threat of state-applied force.  Altruism is a fantasy, according to this model, and all interactions are calculated (perhaps imperfectly) in terms of the benefit to each party.

I´ve found it noteworthy that cities do indeed seem to bring out that version of human “nature”, but that smaller more remote places seem to operate quite happily against “nature”.  Or could it be that our more fundamental nature (let´s forget my skirting dangerously close to essentialism here) is to be cooperative and generous, to support each other in community, and that our “natural” competitiveness is socially constructed?   Looking out at Otra Vida at anchor in the distance, the maoi to the north proudly staring inland, after a day of getting provisions for the boat with my fisherman friend Juan, it certainly feels that way.  And that feels right, feels good, feels like something I can hold on to.