Since we arrived in Inverness on Friday 12th July I’ve been struck by a very special thing going on in these parts: Celtic hospitality.  Nothing like the “dour Scots” of legend, rather we found smiley people who seemed genuinely happy to meet us and had time to talk.  And this wasn’t just an occasional person – it was the norm in the parts of Scotland we saw, and has continued into Northern Ireland and sometimes into Wales.  From lock keepers on the Caledonian canal to people met in the street or sitting at a bar, there was generosity of time and attention, and none of that slightly forced “tolerance of visitors” that one can often sense.

The feeling of a warm welcome that comes closest for me has been in Morocco, especially in the Berber villages of the Atlas mountains.  The Islamic-based tradition of hospitality is – for at least for this jaded ex-business traveller – almost overwhelming, and raises deeply-ingrained suspicions of where the catch is, where the request for a tip comes, or an overpriced sale of something, or some ‘special’ charge.  But there isn’t a catch in Morocco, just as there isn’t in Scotland or Northern Ireland or Wales.  It is real hospitality.  I believe in it, I try to practice it, but being on the receiving end makes me ever so slightly uncomfortable: how can I repay it?  Realistically it is unlikely I will meet most of these lovely people again, and if I did I doubt they would remember the interaction – it was just part of their everyday life.  And in a way that is exactly the point.  The obvious answer is to pass it on, to perpetuate the virtuous circle of hospitality.
The mid July outbreak of Mediterranean weather further coloured our experience of Scotland, with hot sunny days and blue skies adding to the implausibly green landscapes.   The hammock came out several times, although the water temperature made swimming a very occasional activity.  Water below 18C doesn’t normally meet my criteria for swimability.  Loch Ness, where I swam (briefly) on my birthday, was 13C.
Northern Ireland and Wales have been more typical in their weather.  We spent a week weather-bound in Carlingford Lough, the rather theoretical border between Northern Ireland and Ireland proper.  Pounds on one side of the lough, euros on the other, but Guinness, white pudding, Irish accents and friendly people on both.  The water was warmer there, 19C when swimming one evening, and the pubs on both sides were great.
Wendy joined us for a week in the Scottish islands.  We hiked a little, explored the local beers rather more, and talked a whole lot about everything and anything.  We went to Dublin to spend a typically riotous weekend with Theresa.  My family were vacationing in Abersoch, Wales, so we caught up and spent time together.  And Jeff, Klara and Mila visited us in Pwllheli – hiking, cooking, cigars, wonderful conversations, carrot cake, beaches, and Mila learning to climb the stairs on Otra Vida.   Lovely memories from all of these summer visits.
What we didn’t do much was sail.  The mainsail cover went on in the Moray Firth, and it came off again for a couple of hours in the approach to Carlingford Lough, and a little on the passage across the Irish Sea.  That’s it.  The rest of the time we’ve been living on a motorboat with a mast.  Reminds me of another aspect of Mediterranean weather – either no wind or too much, and always on the nose.
Now we’re in Pwllheli after a minor engine incident six weeks ago that snowballed into needing a new bow roller, anchor chain and anchor.  It’s taken a long time … but this is not a bad place at all to be waiting for repairs.  Snowdonia has been a revelation – how could I have grown up less than 100km from here and not known how beautiful and interesting the mountains are?  Looks like we’ll be on our away again in the next few days, heading south across Biscay. 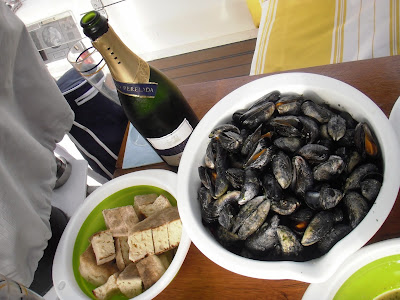 One Reply to “Celtic Hospitality”